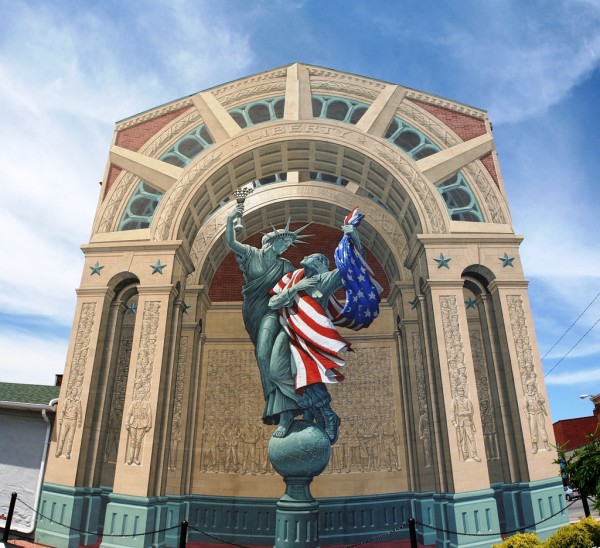 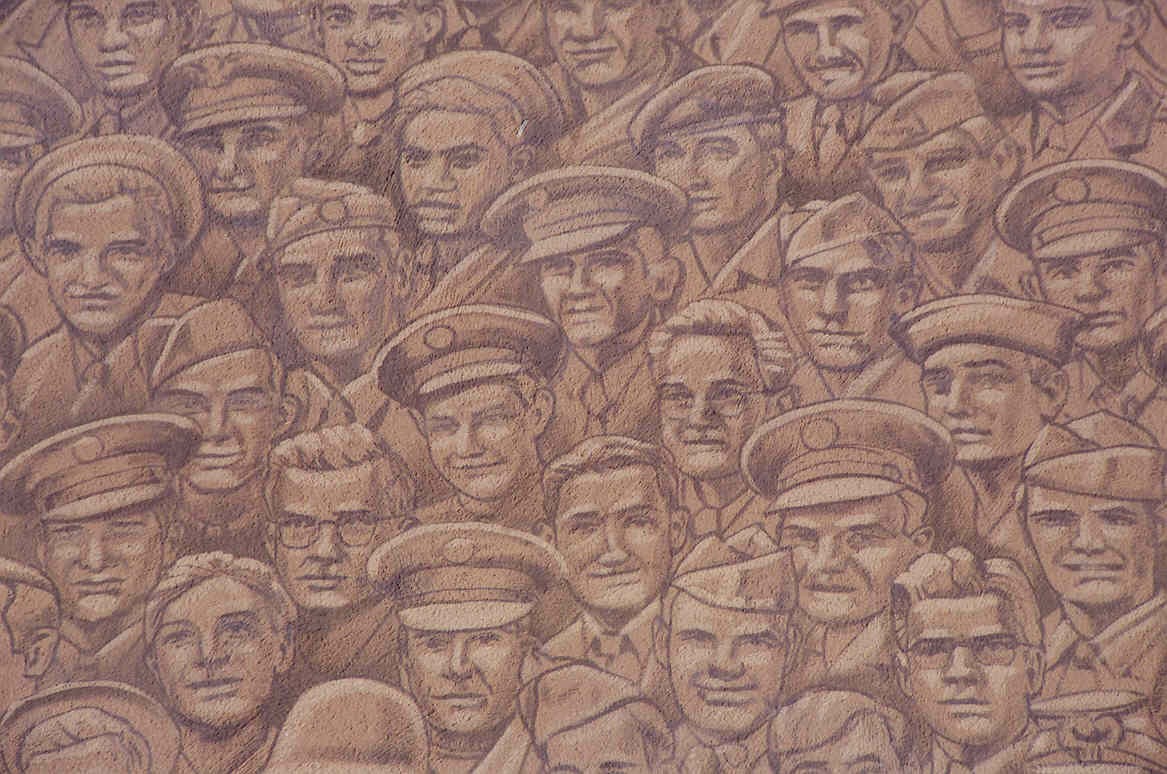 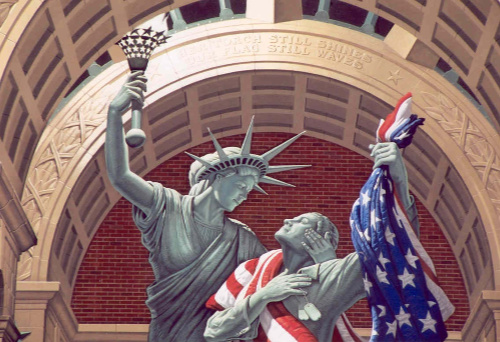 Liberty Remembers features Lady Liberty cradling a dying soldier in her arms. She is flanked by the faces of 285 Crawford County veterans, living and deceased. The veterans depicted in Liberty Remembers span American military service from the American Revolution in 1775 through 2001.

A pictorial legend listing all of the veterans featured and showing their location in the mural is available here.

THE VETERANS. Word was sent out via local media asking people to nominate local veterans by submitting a photograph from their time in service and a short narrative. Within two weeks, a spare room in the artist’s temporary residence was filled with letters, photos, and memorabilia, including medals, dog tags, bomber jackets, and albums, even a saddle! 285 veterans were chosen from the more than 500 submissions, with the main criteria being the clarity of the photograph from which the artist would work.

COURIER DOG NEMO. Nemo was a courier dog who served during the Vietnam war and was trained by a local soldier who opted to submit Nemo rather than himself for depiction in the mural, saying, “That dog saved more lives than I could ever count.”

FRANK THE WAR HORSE. The mural contains a horseshoe representing Frank the War Horse. Frank was the cavalry steed of Abe Conger during the Civil War, serving in Company A of the 12th Ohio. Frank attended company reunions until his death on September 11, 1886. The war horse was buried in full regalia on a farm near Bucyrus.

HARRY L. MARTIN is shown in the front row of the veterans on the Liberty Remembers Mural. First Lieutenant Harry Linn Martin was a United States Marine Corps officer who posthumously received the Medal of Honor for his actions on Iwo Jima on March 26, 1945.

LAURETTA M SCHIMMOLER is also depicted in a front row of the mural. Lauretta was an aviator who became the first woman to establish an airport (the Bucyrus Airport). She was the first woman to command an American Legion post, and was the founder of the Aerial Nurse Corps of America, the predecessor of the flight nurses of the US Air Force.

LADY LIBERTY. Artist Eric Grohe chose a student he saw arriving at a local photography studio for her senior portrait to pose as his Lady Liberty.

DYING SOLDIER. Mr. Grohe used his own experiences in service in Vietnam as inspiration, and asked his brother to pose as the soldier being held by Lady Liberty.

SEPTEMBER 11, 2001. When word of the terrorist attacks on America reached Bucyrus, all work on the mural ceased. The partially completed painting of Liberty became a repository for flowers and notes, and a site of mourning for our community. When painting resumed the next day, Mr. Grohe had included a hand-lettered sign reading, “Her Torch Still Shines, Our Flag Still Waves.” These lines were later incorporated into the mural.

The Liberty Remembers mural is completely privately funded and no city, state, or federal money was used in the project. Local veterans groups and service organizations made generous contributions to the project, as did countless individuals, clubs, and groups.

COST OF MURAL: $115,000
MURAL DIMENSIONS: 44’ high and 36’ wide
TYPE OF PAINT: The mural is painted with Keim Mineral paint.
LIGHTING: Lighting of the mural is made possible by contributions from Altrusa Club of Bucyrus.
CARE AND MAINTENANCE is made possible by the Community Foundation for Crawford County and Projects Inc.