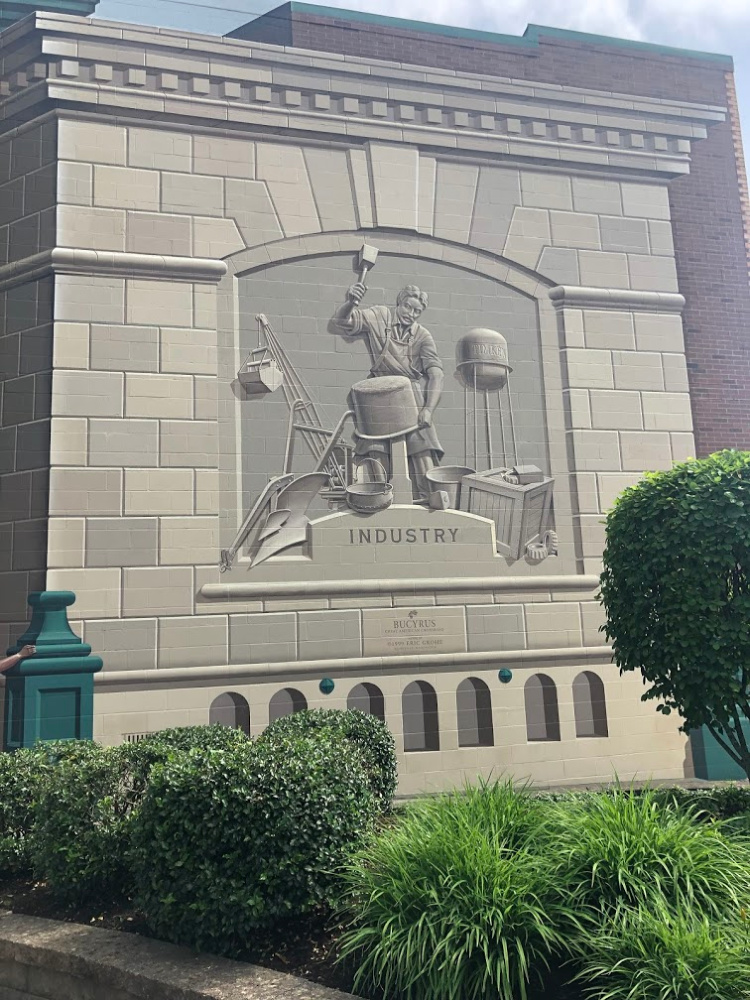 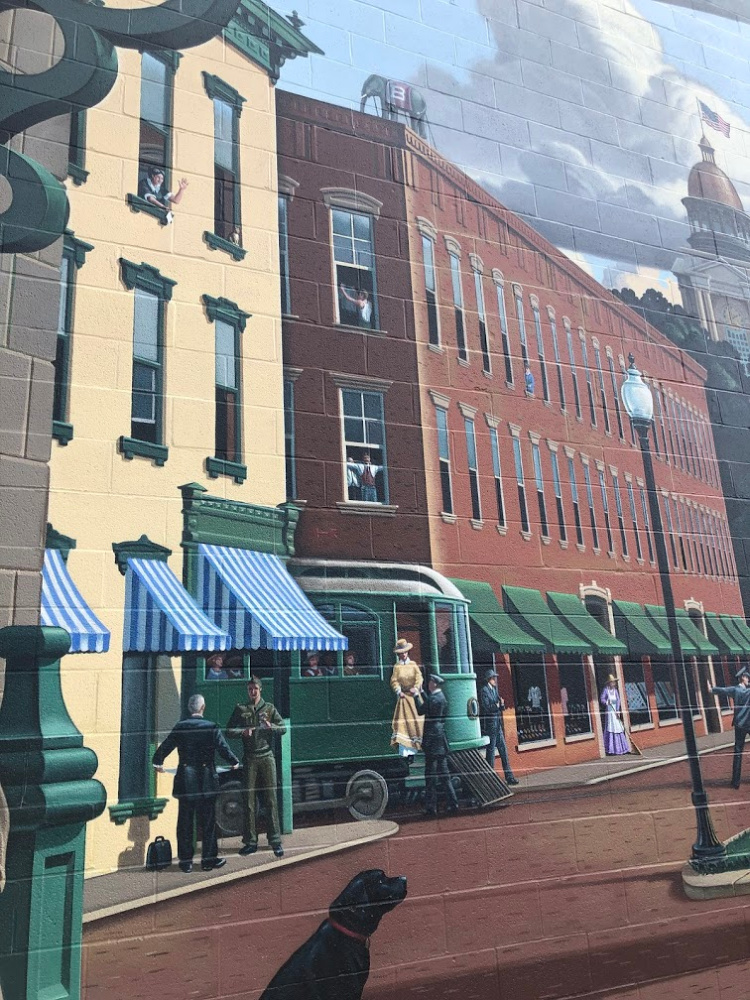 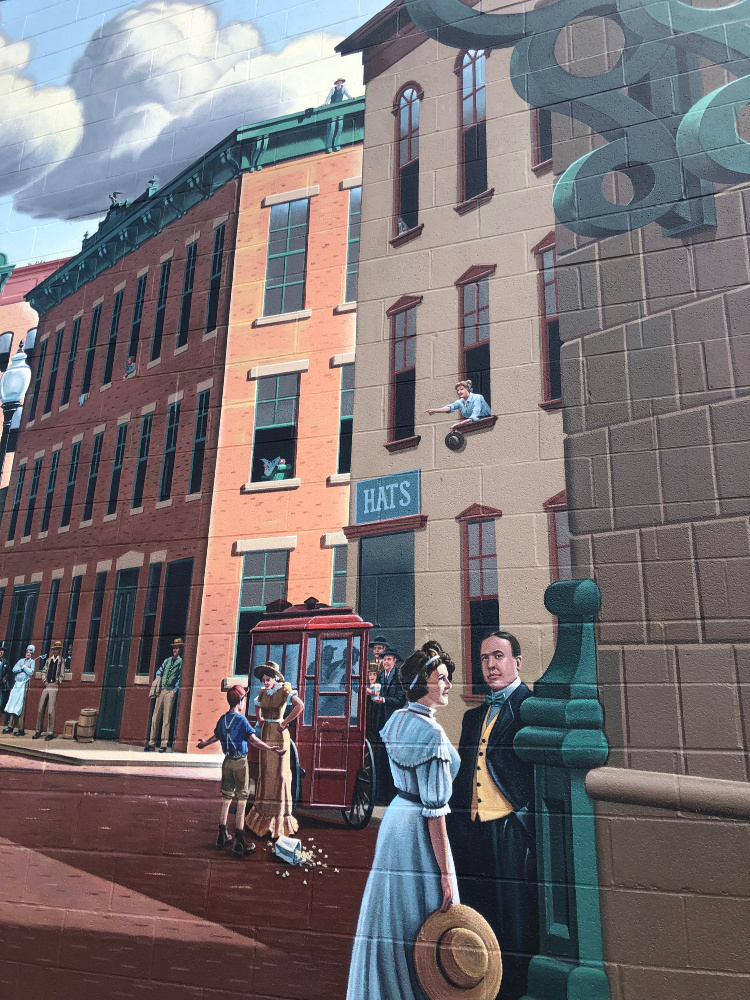 INDUSTRIAL PANEL represents a portion of Bucyrus’ past and present. The Timken Co., D. Picking Copper Kettle works, The Shunk Co. plows, and the Ohio Crane Co. (whose cranes helped dig the Panama Canal) only touch on a part of industry in Bucyrus.

THE MAN IN THE BASEBALL CAP represents today looking back into the past.

FOX’S POPCORN WAGON occupied the town square for over 60 years, providing popcorn, caramel apples, peanuts, and a social gathering place. Recently the Chamber commissioned a replica that was built by the Pioneer Career & Tech Center students. It is operated on weekends by the Waycraft sheltered workshop, with funding from the Bucyrus Kiwanis Club.

THE YOUNG PAPER BOY heralds the arrival of the local newspaper The Evening Telegraph, in Bucyrus since 1887. Reading the paper is Robert Clark Neff, a longtime City Law Director.

THE THREE GENTLEMEN in front of the Elberson Hotel represent Thomas Edison, Harvey Firestone, and Henry Ford, all of whom stayed at the Elberson when attending President Harding’s funeral.

WESTERN UNION OFFICE. During the war too many families were called to the Western Union office to receive news of loved ones’ fates. In the mural, Carol Newland, a soldier’s wife, receives word of her husband’s passing days after the birth of their baby.

CROSSING THE STREET HEADED FOR THE COURTHOUSE, former longtime Bucyrus Mayor Paul Outhwaite, also owner of the local tire shop, is shown with briefcase in one hand and a tire in the other.

IN FRONT OF THE COURTHOUSE beloved town historian and photographer Bill Steele takes a picture of mural artist Eric Grohe and his bride Kathy. The couple became engaged while in Bucyrus working on the mural.

ALONG THE LEFT SIDE OF THE CENTRAL IMAGE the shops are typical of those found in this area in this period. The quilts of local seamstress Lois Ide are displayed in one store window. Local rumors have long alleged that during the 1920s Bucyrus was a “cooling off” spot for gangsters from big cities like Chicago. The artist hints at these stories with the gentleman in front of the street car.

THE ELEPHANT atop the Geiger Clothing store was placed there as an advertising tool. Geiger’s motto was, “Buy your clothing here, for it will last like the hide of an elephant.” The “B” stands for Bucyrus, of course.

THE BANKER AND THE SOLDIER. The story is told that during WWII, General Eisenhower disembarked a train passing through Bucyrus to place a phone call. Eisenhower is shown here approaching Mr. Blicke of the Bucyrus City Bank to “bum a dime” for the call.

THE LINCOLN HIGHWAY, known today as Business Route 30, is called “America’s First Coast to Coast Roadway,” and passes through Bucyrus on this very square. Lincoln Highway markers, similar to the one depicted here, dot the original road from coast to coast.

THE WINDOW AT THE FAR LEFT represents the present looking down on the park below. Cell phone in hand, the person depicted stands ready to keep a watchful eye on the park.

Many other stories and scenes are played out in the Great American Crossroads Mural. The people and activities were chosen from various times through the last 100 years. More than 130 Bucyrus citizens modeled for the artist, 88 of whom can be found in the mural. 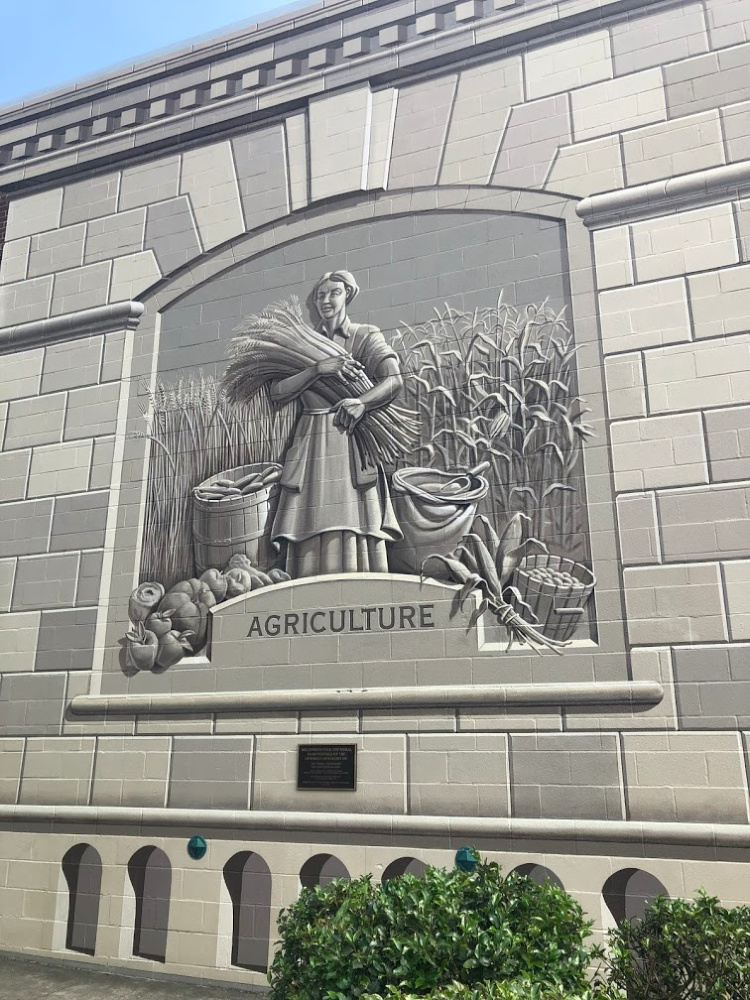 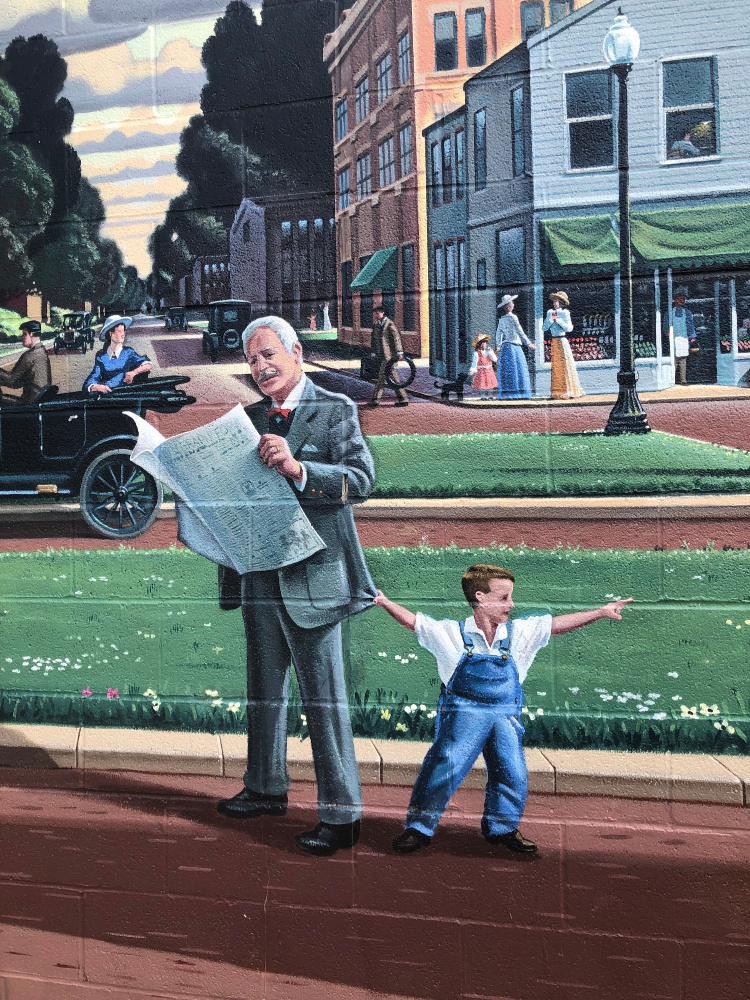 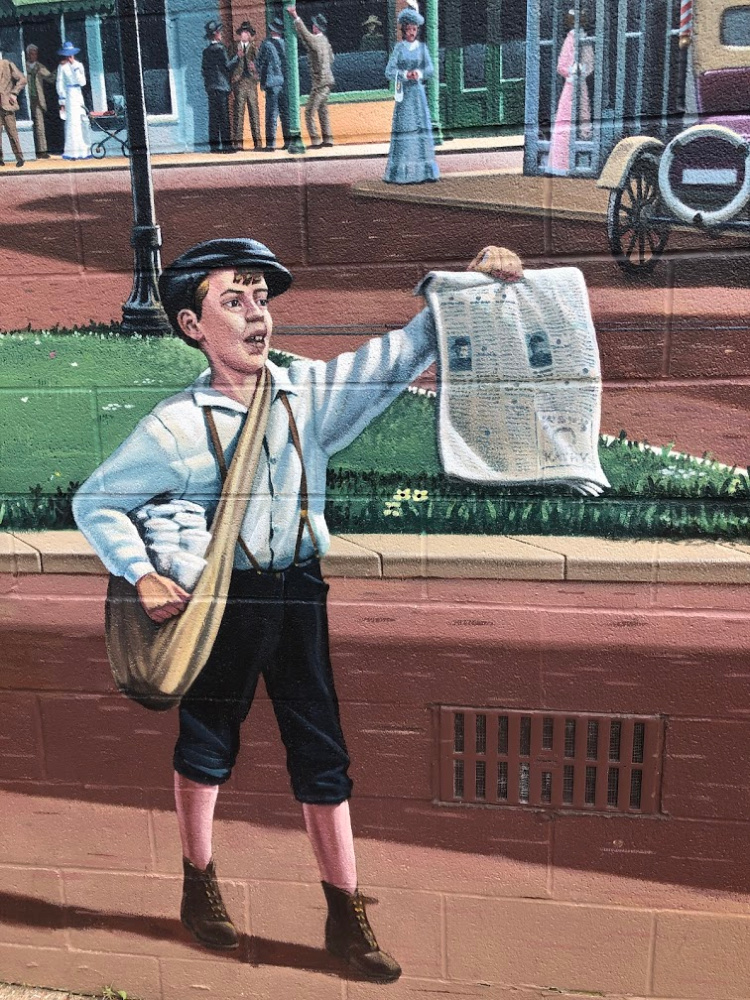 The Millennium Park and Mural project is completely privately funded and no city, state, or federal money was used in the project. The Timken Foundation and the Shunk Foundation contributed to the project, as did countless individuals and organizations.

COST OF MURAL: $70,000
COST OF PARK: $335,000
MURAL DIMENSIONS: 34’ high and 130’ wide
TYPE OF PAINT: The mural is painted primarily with Sherwin Williams house paint.
PROTECTIVE OVERCOATING AND SECURITY: The mural is coated with a protective coating and the park and mural are under 24 hour video security.
COMMEMORATIVE BRICKS were sold to help fund this and future revitalization efforts. Brick sales for this project are complete. No more bricks will be sold for this park.
LAMP FIXTURES & BENCHES were made possible through donations; plaques honor those who have contributed.
FOUNTAIN was donated by Robert Clark Neff and Helen Picking Neff.
CARE AND MAINTENANCE: Weekly cleaning and mowing is done by the Bucyrus Kiwanis Club.

Please honor our posted requests of no bicycles, skateboards, or roller blades in the park. Also, the fountain contains chemicals, please do not allow children to reach in to the water. Planter edges are designed to serve as extra seating, however please do not stand or walk on the planter edges and do not enter into the planting areas.

We hope you enjoy and respect our park. Thank you! 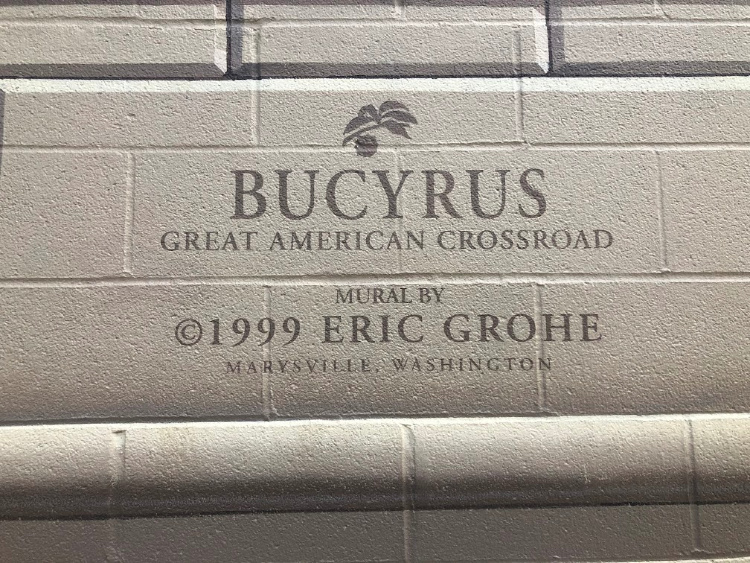 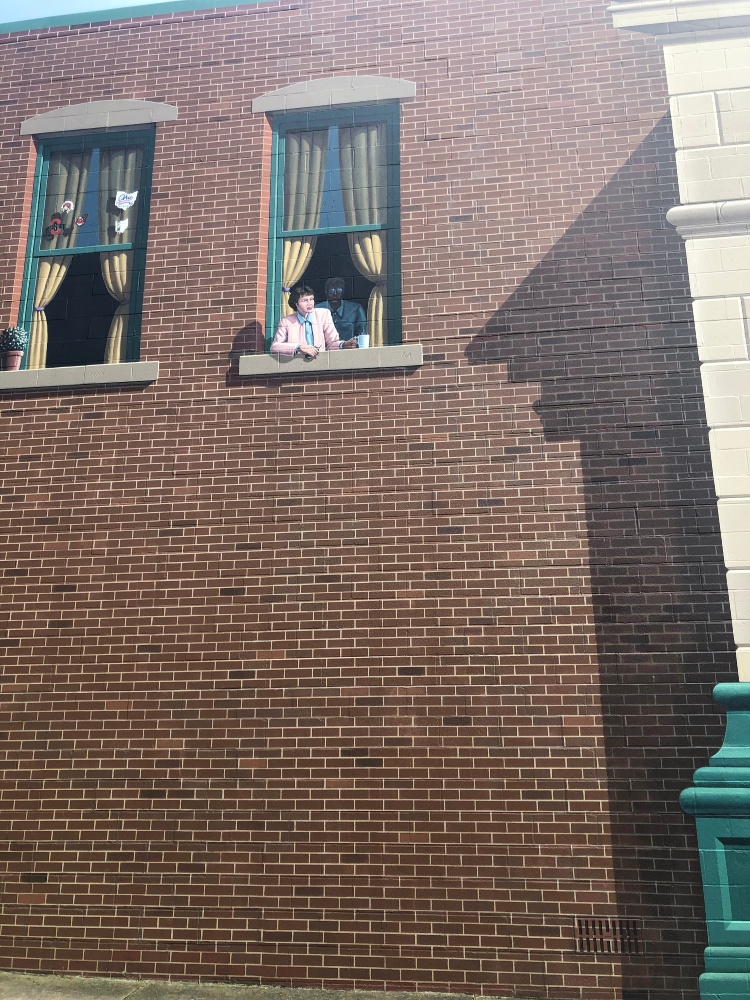 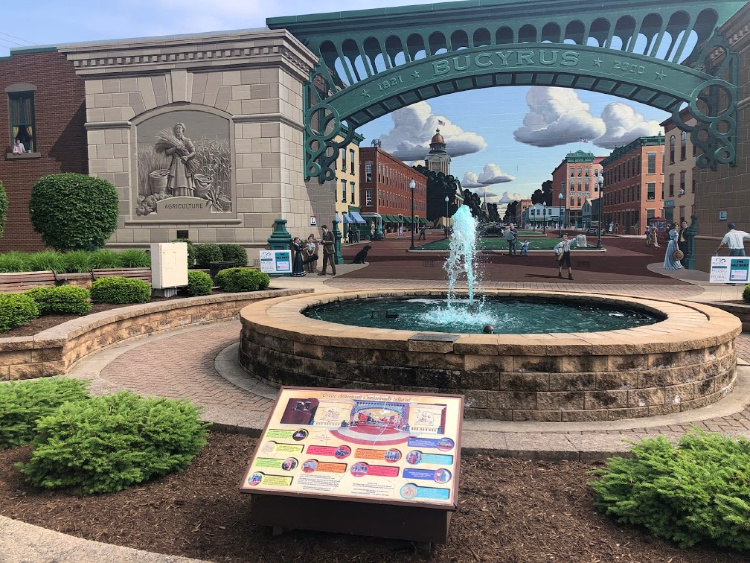